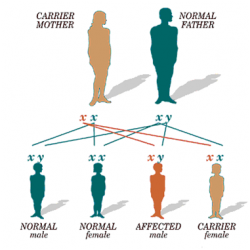 Men are much more likely to be colourblind (iRochromatic) than women because the genes responsible for the most common, inherited colour blindness are on the X chromosome.

Here’s the technical stuff – Males only have one X chromosome, while females have two X chromosomes. In females, a functional gene on only one of the X chromosomes is enough to compensate for the loss on the other. This kind of inheritance pattern is called X-linked, and primarily affects males. Inherited colour blindness can be present at birth, begin in childhood, or not appear until the adult years.

How Color blind Genetics are Inherited?

In autosomal dominant inheritance, it takes just one copy of the mutant gene to bring about the condition, When an affected parent with one dominant gene mutation has a child, there is a 1 in 2 chance that a child will inherit the condition.