What age were you when you discovered you had a colour vision deficit? 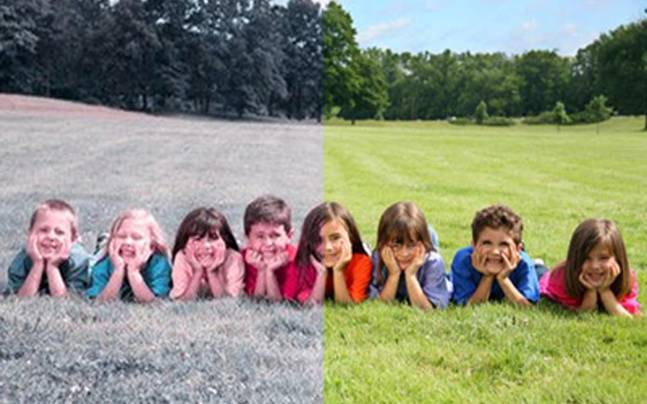 “I can go back to kindergarten when my teacher asked me to pick a colour to paint something. I wanted to pick blue, but these two colours side by side were the exact same. I remember just pointing to one and said “that one” because I couldn’t tell the difference. The next year in first grade, I drew a picture of myself and coloured the sky. Another student came up and asked me why I coloured the sky purple. I had no idea that I accidentally did because it looked blue to me. From then on, I made sure to read the crayon wrapper for the colour, and did not choose the crayons without their wrappers.”

“In 4th grade we were reading data from colour coded charts and I wondered how anyone else could distinguish the different colours. My teacher went off on me about how stupid I was for not knowing the colours. Ended up getting tested later that week and the school forced the teacher into anger management after my parents complained and several students backed up my story.”

“Reportedly, some evening when I was real young I exclaimed something like “What a beautiful green sunset!”

“I got in trouble in kindergarten for colouring things the wrong colour. The teacher called my parents and told them I needed to be in “special ed,” even though colouring was the only thing holding me back.”

“I got sent for testing at about age 7 after I drew a green tree with brown leaves and some brown grass in the foreground. Apparently grass is green! In my defence, it’s not green in Australia during El Nino…”

“I was a teenager, when at school the Ishihara test was taken to all at my age to determine possible further occupational restrictions. I was surprised that I failed the test. Now I have tested myself with your test, which says I am mild deutan. I pass Farnsworth D15 easily, and online F-M 100 hue test says I am slightly deutan, but I can even get normal result if I concentrate very well.

So my deuteranomaly must be very mild, and that explains why I have not had much problems with distinguishing different colours. But once we had a car that was greenish blue or blueish green. My wife was surprised when I said it’s blue. She said it’s green. Sometimes I have said something as green. My wife said no, it’s grey.”

“When I was in 5th or 6th grade my mom and I were at the optometrist’s office to get my eyes checked for glasses. As we were waiting we saw a book with those colour vision tests wherein you have to see certain numbers. I was getting some wrong.

Turns out I have a red/green deficiency. This means that any colour that red or green in it I may see wrong. Stop lights look more orange yellow and green than red sometimes. At night a flashing stop light really confuses me until I get close enough to see if it is the top or middle light that is flashing. Dark blues and purple’s I may see as the other. Once in an art textbook we were to look at the red square for a minute then at the white area next to it. We would see a pink square in the white area. For me it was a brown square.

Things that are clearly red like a firetruck, or stop sign aren’t a problem. Leaves and grass is green. It is when we get variations of these colours that it throws me off.

Despite this I wanted to be an art teacher. Sure made learning how to colour match in painting class fun.

Oh and being a girl, being colour blind is rather rare as it is a recessive trait. My grandpa was colour blind and passed the gene onto my mom making her a carrier but not colour blind. She passed on that gene to me. My dad is colour blind as well. He passed his gene too. There you go to X genes that say colour-blind and you end up with me, a colour-blind girl.”

“I didn’t find out until I was 26.I knew my father was colour blind from an early age, but had no clue about myself. When I made colour mistakes, I just brushed it off as a small error, or else I thought I just had bad taste in clothing.

I was working in a department store in men’s accessories in 1990, and my manager decided one day to transfer me to men’s shirts and ties. Within one week in that department, I knew there was a problem. Customers became infuriated at me on a regular basis, telling me I’m colour blind.

I went and had a complete eye exam, and that’s when I found out. I had a problem with shades of red and green, mainly green. It also affects other colours like the difference between blue and purple.

“During an anatomy class, the instructor passed out some colour blindness tests, and a guy discovered he was colour-blind. My teacher said that it happens maybe once or twice a year in that anatomy class, which is totally surprising.”